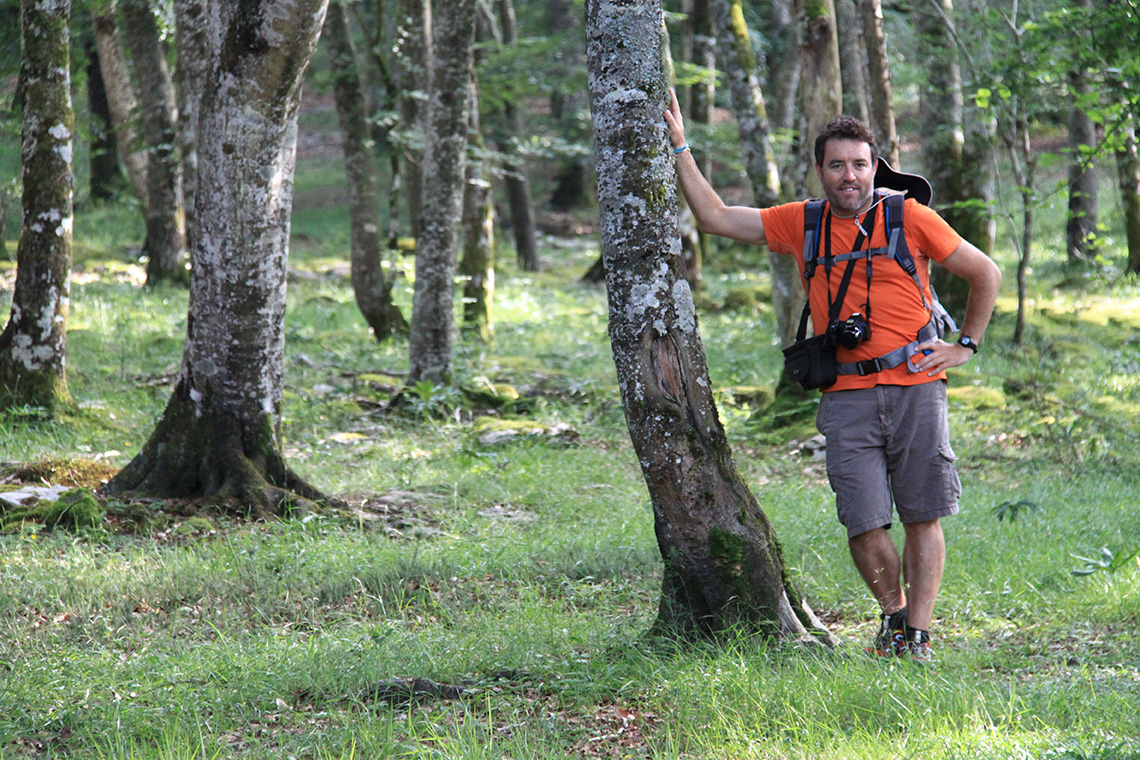 The Observatori Socioambiental de Menorca [Social and Environmental Observatory of Minorca] (OBSAM) is a project by the Institut Menorquí d’Estudis (IME) tasked with compiling, classifying and analysing information of relevance to the sustainable management and development of Minorca. We talked to David Carreras, the OBSAM’s director.

Tell us about your career at the OBSAM.

I have been the director of the OBSAM for six years now. Before that I was a project manager and technician-researcher, which means that I have been involved with the OBSAM in one way or another since it was founded in September 1999. Nevertheless, the seeds for the Observatory were sown with the declaration of the Biosphere Reserve in October 1993. The IME was called upon to manage the biosphere reserve’s logistics function from the outset, I mean monitoring and scientific advisory functions.

People probably know more about land habitats than marine ones. We can all recognise a home-oak wood, a cave or a pine grove fairly easily. What information do we have about marine habitats in scientific terms?

The truth of the matter is that I think that only people who have ever done underwater diving or have donned diving goggles are aware of the existence of an entire “underseascape” and of the variety of environments that populate it. Therefore, it is also up to scientists to explain the diversity of habitats to be found on sea beds, their structural complexity and the pressure and the threats that affect them. Now, thanks to multi-beam probes, underwater robots, high-res cameras and other new technologies we can “draw in 3D” and show the general public what the seabed looks like as if they were in an aeroplane.

Why do we need a cartography of marine and coastal habitats of the Balearic Islands?

Nowadays, nobody would ever dream of undertaking any type of large-scale land-based territorial intervention without having at least a topographic map and a map of soil uses. The same should also apply to the marine setting. We cannot implement the new fishing policy or do anything related to the seabed without having at least a bathymetric chart and a cartography of marine habitats. Which marine habitats are affected by the underwater electricity line that connects Majorca and Minorca? Is the layout the ideal one? Where can you moor or anchor without damaging posidonia meadows? These are but some of the questions that we can answer with a good marine habitat cartography. Moreover, thanks to digital cartography and Geographic Information System (GIS) tools we can quantify the dimensions of these habitats, compare their evolution over time, study their distribution and relate all this information to other variables.

Between 2016 and 2018, the OBSAM implemented the project for the compilation of benthonic zones or layers and communities of the seafloors of Minorca. The Marilles Project is driven by the same spirit, but it also wants to compile the cartography of the other Islands.

What can you tell us about the experience gleaned from the Minorca project? Are the same methodologies that were used in Majorca being applied?

In this regard, Minorca and the Pityusic Islands (Ibiza, Formentera and S’Espalmador) are at an advantage, since they already have a larger mapped-out area thanks to the Echo-cartographic study of the Ministry of the Environment. Another major source of information stems from the INDEMARES project by the Fundación Biodiversidad, completed just recently. And neither should we forget the cartographies produced by the team of Dr Ballesteros in Blanès, the most rigorous ones. Therefore, our work consists basically of inputting all this information into a single system of coordinates; a unique and standardised classification legend; and also of correcting any deviations and information gaps. This is how it was done in Minorca and it is the way we would like to do it in the other islands.

What does day-to-day cartographic compilation work consist of?

The first step is always to procure the different cartographic bases. This may seem easy, but obtaining the data is not always that straightforward, despite the fact that they have been paid for with public funds and that access to environmental information is regulated by law and by international agreements. If there is one thing I have learned over the years it is that public information is not always easy to access or download. This is why OBSAM fights to collate and make all this information readily accessible. Once you have the cartographic layers, you need to join them together, homogenise them and check for possible mistakes. Most of the errors detected are small details that can be corrected on a computer by means of GIS and orthophotos. Nevertheless, any information gaps and doubts that arise call for fieldwork to identify the different habitats properly. So at this point you do actually need a boat, underwater diving equipment, GPS, laminated orthophotos, underwater cameras, etc.

In what other aspects related to the Balearic Sea is the OBSAM working on?

At this moment in time we have two monitoring projects ongoing in Minorca: one of them is about the coverage and density of posidoniameadows and the other is about taking a census of fish that are particularly vulnerable to fishing. They might look like simple projects, but whenever you go out to sea, logistics can get complicated and costs soar. This is why it would not be possible to make headway in these projects without creating alliances with other organisations. And in these specific projects we are collaborating with the Estació d’Investigació Jaume Ferrer of the IEO, the Fundación para la Preservación de Menorca and the Agencia Menorca Reserva de la Biosfera. We are also involved with several groups in a local-action platform related to plastics that may eventually have an international impact through the World Network of Island and Coastal Biosphere Reserves. Finally, we are continuing to collect information about the marine environment of Minorca, which we trust will see the light one day in the form of a book.

It goes without saying that none of this work would be possible without a great team of people and professionals, namely my colleagues and collaborators. I would like to mention Eva, Sònia, Marina, Marta and Marc, who are involved in the marine and environmental aspect.

A book: The Kite Runner, by Khaled Hosseini.
An image: the vision of a green field that stretches down to the sea, with the sensation of the wind on your skin.
A marine species: the algae of the Cystoseiragenus, which form miniature forests.
A reference organisation or person: The European Environment Agency.
A beach: Cala Mica (Minorca) and a few others that I will keep to myself.
A phrase that defines you: Climbing mountain calls for patience and perseverance. I like climbing mountains.
Optimistic, realistic or pessimistic? Pragmatic.

Expand the Marine Citizen Science in the Balearics

Sandra Espeja is the new coordinator of the Balearics Citizen Marine Science Program.