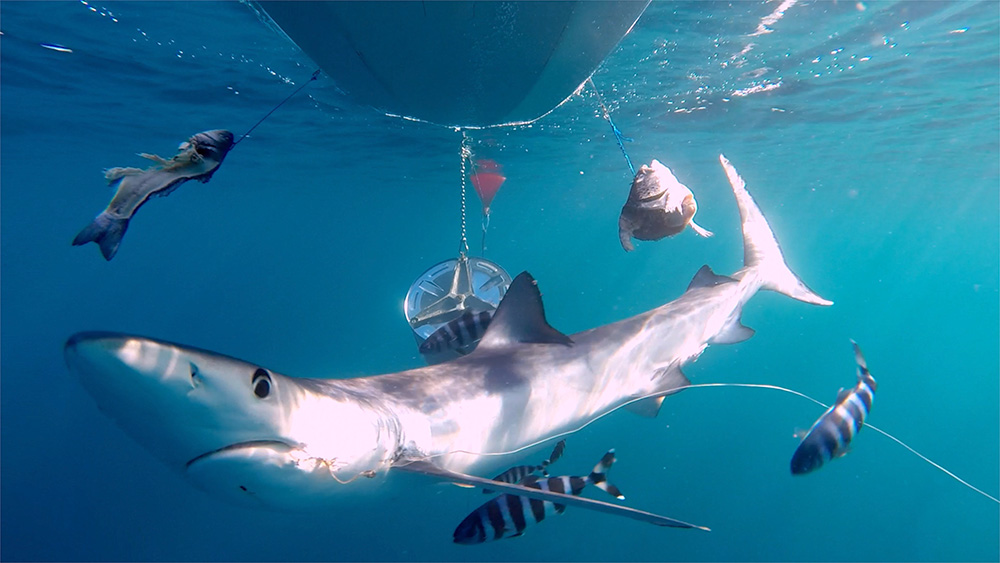 For the past two years the NGO Shark Med has been designing an innovative remote underwater video system to study sharks. Finding them is often difficult, due to their low population density and the fact that they are pelagic species that live in the open-seas, far from the coast.

The first images obtained show how the impact of longline fisheries compromise the survival of these species. Fifty percent of the blue sharks recorded have hooks and drag long lines, some which attached to the remains of nets and debris.

Shark Med has signed a partnership agreement with the Marilles Foundation for a total of 30,000 euros, which will allow the NGO to continue collecting data on blue sharks and other shark species in the Balearic Sea.

The remote cameras - located miles away from the coast - allow direct observation of the sharks in their natural habitat. The aim is to gain a better understanding of these animals and their current conservation status; as well as to change their distorted bad reputation that has overshadowed the true situation of vulnerability in which they find themselves.

The study will be carried out on the main islands of the Balearic archipelago with the collaboration of Save the Med in Mallorca, the production company Paleártica Films in Menorca and Manu San Félix and the Vellmarí Association in Ibiza and Formentera.

Agustí Torres, president of Shark Med, states that: "The main objective of the project is to provide, through the scientific data obtained in the study, the necessary tools to raise awareness about the importance of the recovery and conservation of sharks, as well as to promote the sustainable measures to be adopted by the activities that most affect them, demanding real and concrete changes in longline fisheries, for example".

According to Aniol Esteban, director of the Marilles Foundation: "A sea with sharks is a sea in a good state of conservation. The protection of these species is a priority for Marilles and the Balearic Islands can play a key role in leading their conservation in the Mediterranean. The only thing to fear about sharks is their extinction".

Sharks play a vital role in maintaining the balance of the food chain and the health of marine ecosystems. Blue sharks have been declared by the IUCN (International Union for Conservation of Nature) as an "endangered species" in the Mediterranean. Even so, current legislation in Spain and other European countries does not consider them a "protected species".

Other previously common open sea sharks such as hammerheads, mako and thresher sharks are now seriously threatened. This is mainly due to pelagic longline fisheries targeting swordfish. In the Balearics, this type of fishing is only carried out by the peninsular fleet - mainly from Carboneras (Andalussia) – and fleets from other countries. Sharks are particularly vulnerable to fishing pressure, as they are slow-growing species, take time to reach sexual maturity and have a low fecundity rate.

In the Mediterranean there are long and representative data series for a few species such as hammerhead sharks (Sphyrna spp.) blue shark (Prionace glauca), shortfin mako (Isurus oxyrhinchus), porbeagle (Lamna nasus) and thresher (Alopias vulpinus). Ferretti et al. (2008) have estimated a decline of 96-99.99% compared to populations that existed from the middle of the 20th century. It is estimated that 53% of Mediterranean sharks, rays and chimaeras are at risk of extinction (IUCN Red List).

Pelagic longline fisheries are the main cause of death for blue sharks and other shark species. Blue sharks are caught as bycatch although there is a market for them. Spain is the leading import-export country for blue shark meat in the EU.  However, there is insufficient information about the volume of blue shark caught by the longline fleet in the Mediterranean.

We are calling on the Spanish government to:

Sharks as a tourist attraction

In some tourist destinations, such as the Maldives or the Caribbean, the presence of sharks is a major attraction for the local economy. In the Canary Islands there is diving tourism related to angelsharks and rays. In fact, a study (Pew, 2009) estimated that the presence of these species attracts at least 3 million euros a year and supports circa 100 jobs.

Initiatives similar to those that exist in the Canary Islands or other territories could be replicated in the Balearic Islands, but this requires a solid research programme and stronger species protection. To do this, economic recovery policies must put the sea at the centre; the conservation of the sea is key to the prosperity of the Balearic Islands.

Shark Medis a non-profit association created in 2017 for the study and conservation of sharks in the Western Mediterranean, with a focus on the Balearic Islands. Its team includes biologists and filmmakers to combine scientific research with dissemination and awareness. Shark Med counts with the collaboration of the Balearic Islands University and the University of Perpignan, and a team which includes Professor Eric Clua, an internationally renowned expert on sharks, Agustí Torres, photographer and documentary filmmaker and Ana Maria Abril.