Tell us about your background. How did you come to work at the Palma Aquarium?

My work is based around the handling and management of marine animals. I am a qualified conservationist and have worked for many years in the area of recovery of marine fauna, especially cetaceans, sharks and sea turtles. I arrived at Palma Aquarium just before it opened to the public to manage their environmental education and conservation department. It had been a month since I had left my previous job and I was planning to take a sabbatical… but it wasn’t to be! I was working for Palma Aquarium exactly one month later.

What is the Recovery Centre at the Palma Aquarium, and what work do you do there?

Sailors and fishermen often come across injured or sick turtles who need help. A call to the emergency services (112) activates the rescue protocol. Firstly, they’re taken to the Recovery Centre, where several tasks are carried out: from cleaning tanks, filtering or taking temperatures, to preparing food, treating the animals, transferring them to the Aragó veterinary clinic, collecting data on individual animals and keeping daily records of observations and behaviour. 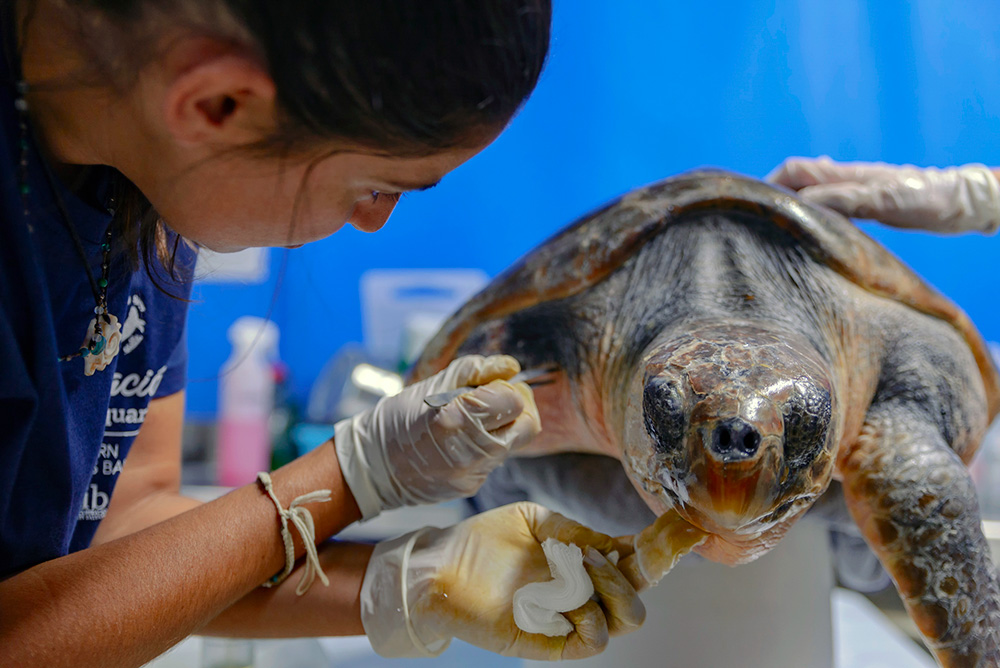 It's never the same, and I never know what each day will bring. Some days there is more office work, and others more direct contact with the animals. There are times when I am in the middle of something and an animal rescue notice comes in – you have to drop everything and organise, coordinate and manage the rescue operation. Apart from the direct work with the animals, our Foundation also takes part in different projects, studies and research, so we have to attend meetings, conferences, debates and presentations.

Another of my responsibilities is to take care of school visits:  prepare classes and activities, communicate with the teachers, make the bookings and coordinate the activities they choose from our environmental education programme. We work closely with our team at Palma Aquarium to create these activities – lots of creative teamwork going on!

Tell us about the turtles.

The human reaction when we find an entangled turtle is to want to liberate it and set it free in the sea, but this is bad practice.

Turtles are incredible animals. They are very strong, but nowadays they are one of the species we take care of the most in the recovery centre, as their their habitat is endangered right now. One of the most significant impacts is that of entanglement in what we call “ghost nets”. These nets are made of all types of rubbish, ropes, discarded bottles or survival nets from the coastal population of North Africa. They are released into the sea and become dangerous traps for turtles. Many of them get their fins entangled in them and, if they’re lucky to survive, a fin will most likely have to be amputated. Other turtles aren’t so lucky, and thousands die this way each year.

If the turtle has a strangled flipper and its blood circulation has been interrupted, the blood in the flipper becomes toxic, and releasing it allows toxic blood to flow through the rest of its body and, most likely, lead to death. The best practice when a sick or injured marine animal is found is to call 112, so they can alert the rescue teams, who will immediately be on their way.

There have been many cases of sea turtle rescue this year in the Balearics – many more than last year. Numbers in the last two years have been on the increase.

Sea turtles teach me something new every day. Each case is independent and different, each animal has its own character and responds to food, treatment and care in its own unique way.

I’m learning that, as a species, we should be more respectful and careful with all ecosystems and natural environments. We should be more attentive and considerate of our environment and give more thought to what we want to leave to those who come behind us.

What would you say are the main challenges in marine conservation in the Balearics?

Perhaps more surveillance at sea or larger fines are needed. Some entities would rather pay the fine than stop fishing with destructive methods. The sea has no borders, and we must make a huge effort to conserve marine species and the health of the sea. Conservation of the Balearic Sea is in decline, but it is also true that in recent years there has been a social movement towards environmental conservation. It has been so abused, that it is very wounded: I've never seen so much plastic as this year, and yet I'm certain it's one of the years in which less rubbish has been dumped in the sea. There's a lot of work to be done, a lot of awareness to be raised. I feel young people between the ages of 25 and 35 years old need to be educated in this area: it’s as if this generation has been left in limbo. Young people between the ages of 16 and 20 are very ecologically aware, but there is this whole other age group that seems to have been left behind.

A great deal of good work has been achieved in recent years, but perhaps we need to legislate fisheries and revise harmful fishing methods at a political and social level. One example is that in recent months we have seen drift nets impacting on large cetaceans. These nets have been banned in Spain since 2000! However, their presence has increased this year, and they are not Spanish nets, but rather from neighbouring countries.

A book: The Bible.
An image: Turquoise coves.
A marine species: Dolphin.
An organization or person who is a role model: Barack Obama and Jacques Mayol.
A beach: Cala Sa Nau.
A phrase that defines you: Brave and tenacious.
¿Optimist, realist or pessimist? Optimistic.