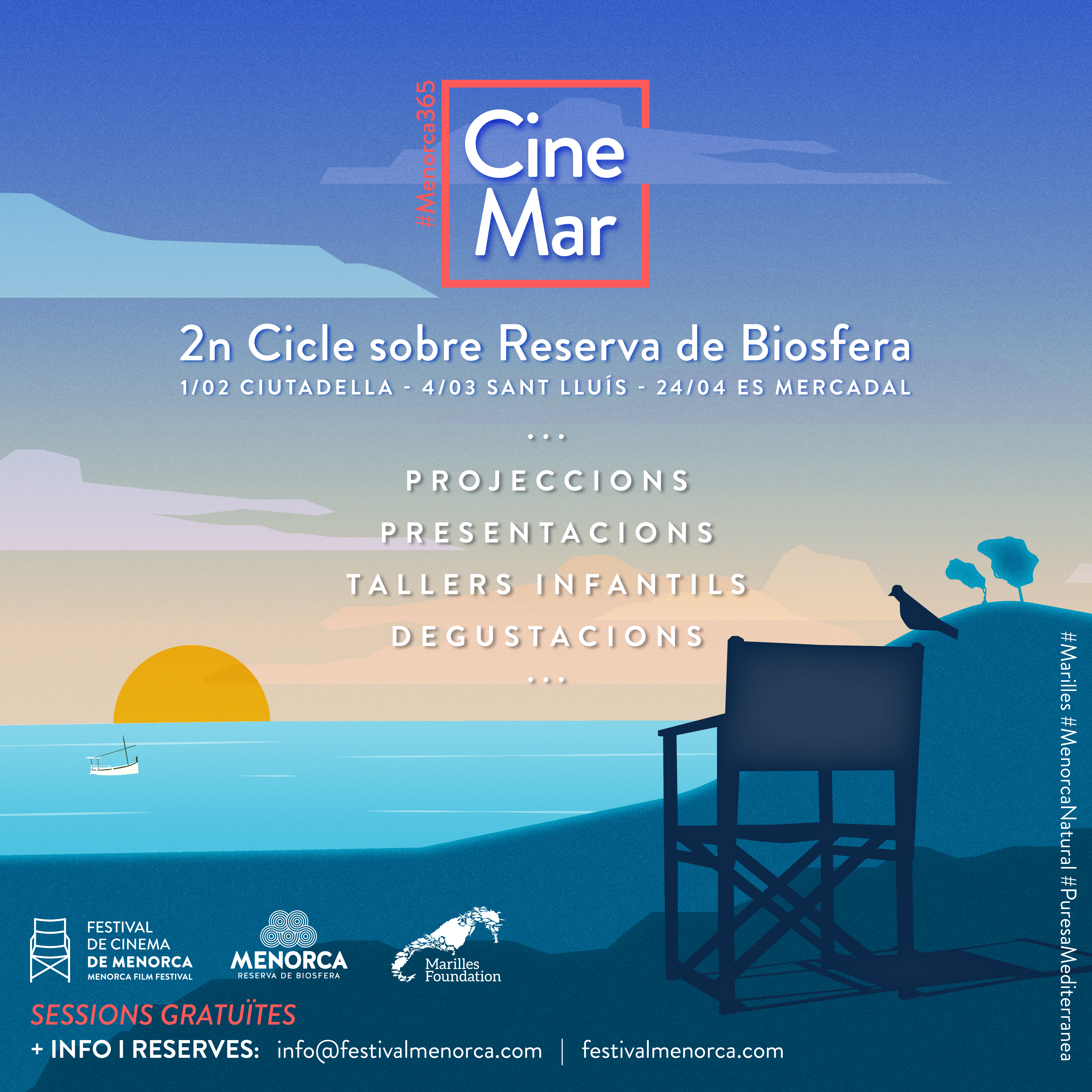 The CineMar cycle, organised by the Agència Menorca Reserva de Biosfera and the Festival de Cinema de Menorca, begins in February with screenings and activities that everyone can enjoy. This year the Fundación Marilles is also taking part and the plan is to extend the cycle throughout the year.

The Agència Menorca Reserva de Biosfera and the Festival de Cinema de Menorca present the latest films in a cycle that began in 2019. Entitled CineMar, the sea plays a leading role in the new Reserva de Biosfera de Menorca cycle and the aim is to use film to make the general public more aware of the goals of the biosphere reserve.

CineMar opens in February with films and activities suitable for all the family. This year the cycle is being supported by the marine conservation organization Marilles Foundation. Furthermore, there will be screenings and activities throughout the year.

The enlargement of the Reserva de Biosfera down to the sea and the recent creation of the Illa de l’Aire marine reserve provide the impetus for making the sea the focus of the new cycle. The idea is to raise public awareness of the marine and coastal scale of the biosphere reserve through a cycle of films suitable for all the family. Three sessions are already programmed between February and April and further screenings will be announced in the coming months.

Maite Salord, the environment and Reserva de Biosfera councillor commented: “One of the objectives of the reserve is to make people aware of its values. These activities are an entertaining way of bringing people together. We must thank both the Festival de Cinema and the Fundación Marilles for making this project possible.”

As well as screenings, the CineMar cycle will include family activities, workshops, round-table discussions and debates to raise awareness of the environmental challenges our waters face.

The Marilles Foundation, a not-for-profit body that strives to make the Balearics an international role model for marine conservation, has joined this initiative which shares one of its priorities: using images to bring people closer to the sea. Marilles supports a maritime cinema cycle in Mallorca which it is now extending to Menorca. “Cinema is another way of diving into the sea. We’re very happy to be part of this cycle and hope that it will strengthen people’s connection with the sea and the Menorcan coast,” said Ana Peña, head of communications at Marilles.

Furthermore, the Festival de Cinema in Menorca will include the cycle in its Menorca 365 program, a program that presents themed activities and film screenings throughout the year.

The first screening in the CineMar cycle was held on February 1 at 11am at the Cinemes Canal Salat de Ciutadella. There was a workshop about understanding sand and identifying microplastics which was devised by the Menorca Preservation Fund as a family activity.

There was a presentation by the Menorca Preservation Fund followed by a screening of Tomm Moore’s children’s film Song of the Sea. The event was rounded off by a tasting of drinks made with local produce.

The second event will be on Wednesday, March 4, at 20h in the Albert Camus theatre in Sant Lluís. The evening will begin with a presentation by the Balearics government about the enlargement of the biosphere reserve down to the sea. This will be followed by a screening of the short film Mareas ocultasby the Spanish film-maker Mònica Cambra and the Mallorcan documentary El archipiélago indómito, by Rubén Casas

The final session in the CineMar cycle will be held at Mercadel on April 24 at 20.30h. Per la Mar Viva will preview the organisation’s planned activities followed by the French feature film Jacques, made by Jérôme Salle, which is a fictional account of the life of the famous scientist Jacques Cousteau.

All screenings are free and seats can be reserved at this email address info@festivalmenorca.com. The events will end with a tasting of local products.

The CineMar cycle is also supported by the Obra Social La Caixa, the local authorities of Mercadal and Sant Lluís, Cinemes Canal Salat and is subsidized by Ministry of Culture.

More sessions will follow the initial three screenings. In the coming months the program for the rest of the year, which is still being formulated, will be announced.