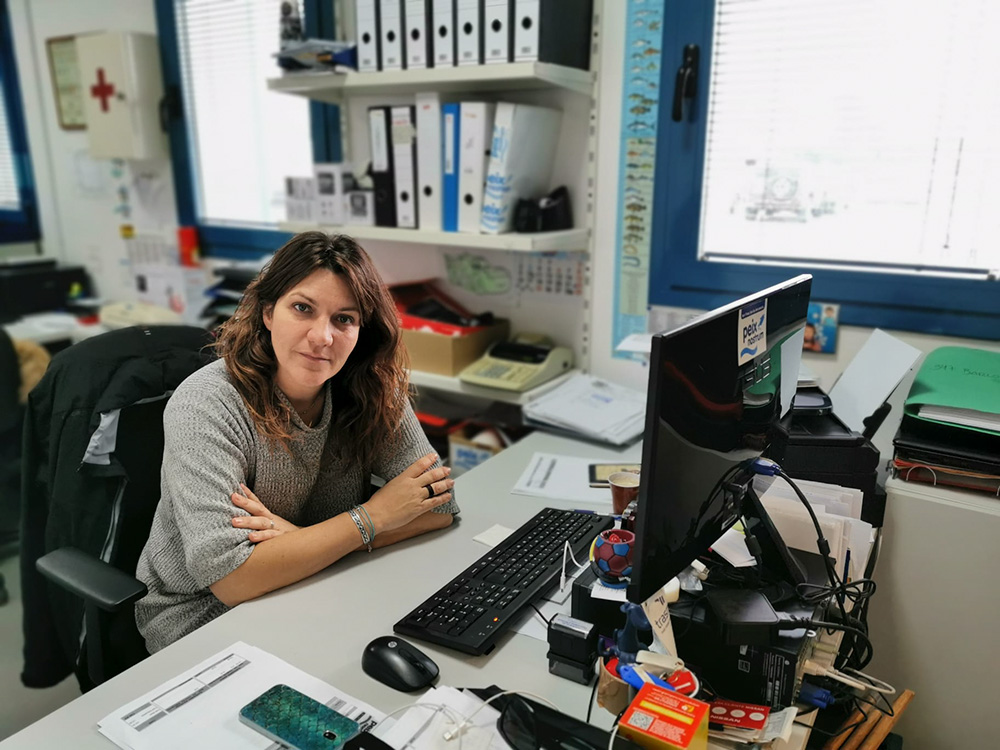 In 2022 the fishermen’s association will celebrate its centenary. It comprises 50 members and a managing council. The association centralises sales, labelling and conservation. It doesn’t hold auctions and never has. Prices are set by the managing council and are maintained depending if they are agreed on. They also work intensely to promote local produce, on environmental education and other topics to do with fishing. We interview Marga Serra who coordinates environmental projects.

HOW DID YOU COME TO WORK FOR THE IBIZA FISHERMEN’S ASSOCIATION AND WHAT IS YOUR ROLE?

It happened more or less by chance. I spent five years working in an aquarium and a recovery centre for turtles. Then I worked for a conservationist organisation and that’s when I first came into contact with the Ibiza fishermen’s association. One day we were involved in a joint activity and that was when we initiated an environmental education project for schools about the fisheries sector and Peix Nostrum. From that flowed more educational initiatives which we have extended to schools in three of the island’s administrative areas. We work with Can Marines which is where the fishermen and women of the future are trained. We also carry out many other informative activities such as open days and round-table discussions. Right now we’re developing the Future Reserve project funded by Marilles. I can’t imagine working anywhere else. Here I’ve discovered a whole new world where we work on management, education, conservation and marketing. There’s a great team and I learn something new from them every day. It’s a sector that cares about preserving things; it’s not just a job, it’s about tradition, gastronomy and the milieu. I have to say I’ve become completely hooked.

TELL US ABOUT THE "MARE NOSTRUM: FUTURE RESERVE" PROJECT?

What we aim to offer Ibizan society with the Future Reserve project are experiences that bring them closer to the marine reserves of Tagomago and Es Freus. Our main objective is to get away from the perception that there’s a management model that only exists on paper and only benefits a certain sector and to urge people to feel a part of it. We want them to visit and take a closer look. We want people to see the benefits, not just in terms of the environment and fishing, but also in the social, economic, tourism and sailing context. In short, we want them to understand their role in the sustainable development of the entire Ibizan community. The project focuses on three groups of people: schools, fishermen and the general public.

ON NOVEMBER 24 & 25 YOU ORGANISED SOME CONFERENCES WITH FISHERMEN. WHAT EMERGED FROM THAT?

To be honest, it was really positive. A lot more people came than we expected, around 30 altogether. Everyone said they were left wanting more and that we should do it again, which is great. It was a great opportunity to bring together people from three Pitiusas associations along with experts and colleagues from the sector, something that doesn’t happen every day. Among those taking part were Basilio Otero, president of the National Federation of Fishermen’s Associations, Nicolás Fernández, secretary of the Cádiz federation, Toni Box, a doctor in biology who is a fisheries inspector for the Ibiza government, Inmaculada Montero, a specialist at GALP in Ibiza and Formentera and Emilio Louro of the Fundación Lonxanet who is a manager at Fresco y del Mar in Galicia. The meeting was conscious of the sector’s peculiarities and preferences and was organized so that people got as much out of it as possible. Two clear and powerful messages emerged from this first meeting: the need for the three associations to establish some common objectives and to work together to achieve them and to encourage joint working with others who co-manage fishing, given the good results many have achieved.

WHAT OTHER ACTIVITIES ARE YOU PLANNING AS PART OF THE FUTURE RESERVE PROJECT?

We’ve already started the educational part. We’ve set up workshops, carried out surveys among students and given them the basis for a photography competition we’ve created for them. And as I said earlier, we’ve also carried out the first activity aimed at fishermen with the conferences in November. We will continue with this and will begin the first activities aimed at the general public, although we’ve already handed out questionnaires to find out how much people know about and value marine reserves. We’ve also prepared information that we will distribute. Now we need to organise round-table discussions, field trips and some surprises.

WHAT IS PEIX NOSTRUM?

Peix Nostrum is the brand under which fish and fish products from the Ibiza and Sant Antoni de Portamany fishermen’s associations are marketed. All products carrying the brand have to be labelled and some so-called “strong fish” and crustaceans come with a green clip. Everything sold under the brand is from here and was fished that same day, so it has to be very fresh and caught by our local fleets. Furthermore, as I often say, the fishermen don’t just fish, they also take part in scientific environmental studies, educational activities and gastronomic fairs to encourage the consumption of traditional fishing products that are being lost, so they involve other areas of life in the world of fishing.

A book: Moon Palace, by Paul Auster.
An image: my family in Es Codolar, in the Parque Natural de Ses Salines.
A sea creature: sea turtle.
An ideal organisation or person: without doubt the Ibiza Fishermen’s Association.                           A beach: Es Codolar.
A phrase that defines you: Never think you don’t know how to do it.
Optimist, realist or pessimist? Optimist.