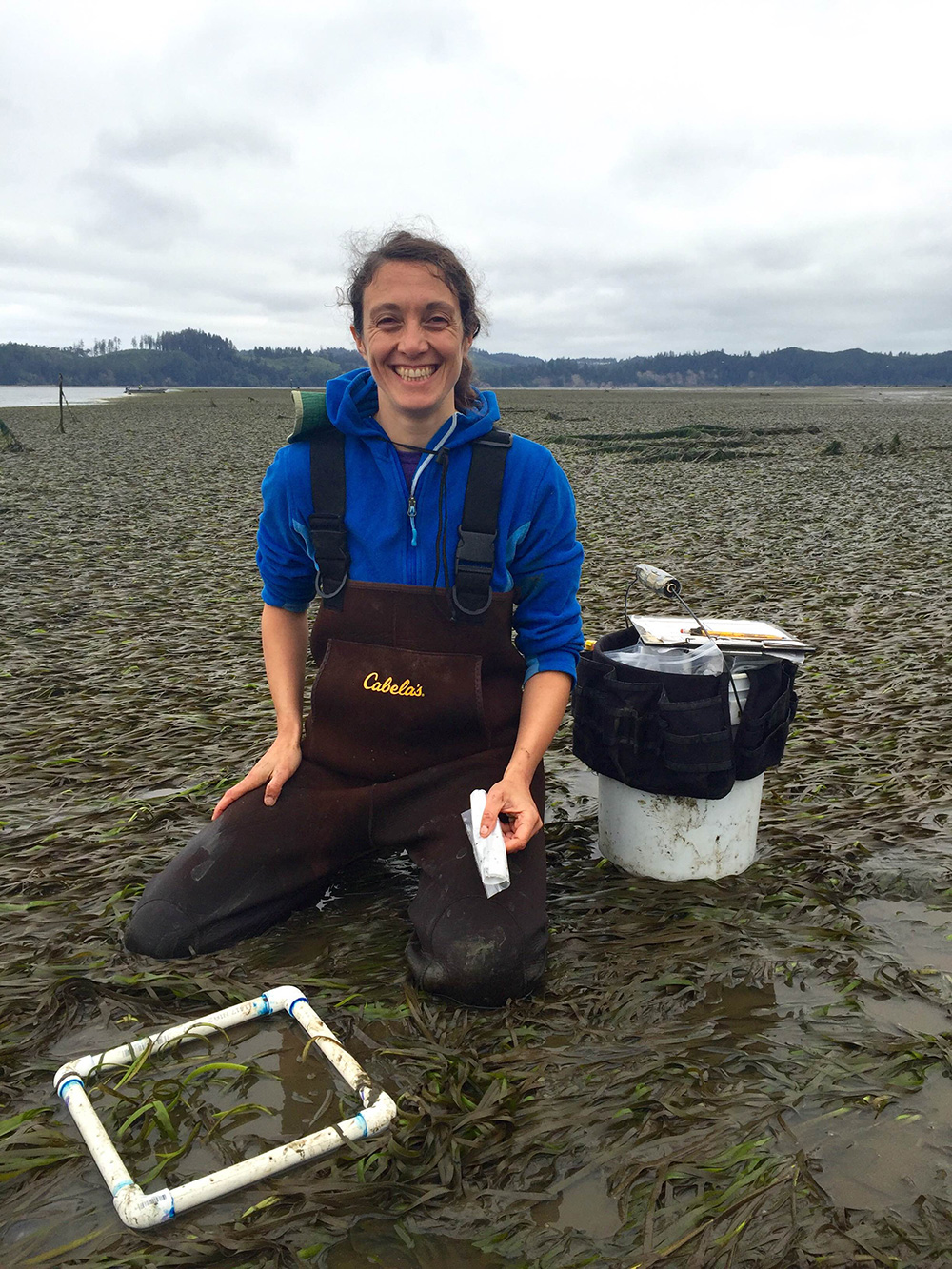 Observadores del Mar (Observers of the Sea) is a marine citizen’s science platform in the Western Mediterranean that’s fast becoming a point of reference in the marine world. Since its creation in 2012, it has drawn in and involved thousands of people in the marine investigation arena. The platform is coordinated from the Spanish National Research Council, CSIC, which includes the Centre of Advanced Studies of Blanes, the Institute of Marine Sciences and the Mediterranean Institute of Advanced Studies (CEAB, ICM and IMEDEA), as well as experts from various national and international research  centres. The platform is currently working on fourteen projects. We speak to Fiona Tomas Nash, head scientist of IMEDEA and researcher in charge of two of these projects: “Invasive seaweed” and "Seagrass meadows in reproduction”.

Tell us about your career.

I have a degree in biology and a doctorate in ecology, both from the University of Barcelona – I graduated in 1999 with First Class Honours and did my doctorate in 2004. I’ve worked in various institutions related to ecology and marine conservation, both national and international., including Scripps Institution of Oceanography in San Diego, California; Bodega Marino Laboratory, also in California; the University of Western Australia,  in Perth, and Oregon State University. I arrived in Mallorca in 2008 to work at IMEDEA and settled here a few years ago.

I specialise in ecology and the conservation of coastal benthic communities, mainly those dominated by marine macrophyites (marine phanerogams and seaweed).

When and how does your relationship with Observadores del Mar begin?

My relationship with them started in 2015, with an outreach project about invasive species funded by The Spanish Foundation of Science and Technology, FECYT. It was called “Ojo a las Invasoras” (Beware the Invader, https://imedea.uib-csic.es/sites/ojoinvasoras/), and aimed to promote information about the issues surrounding invasive species in the Mediterranean. This led to the creation of the Invasive Seaweed Project with Observadores del Mar. 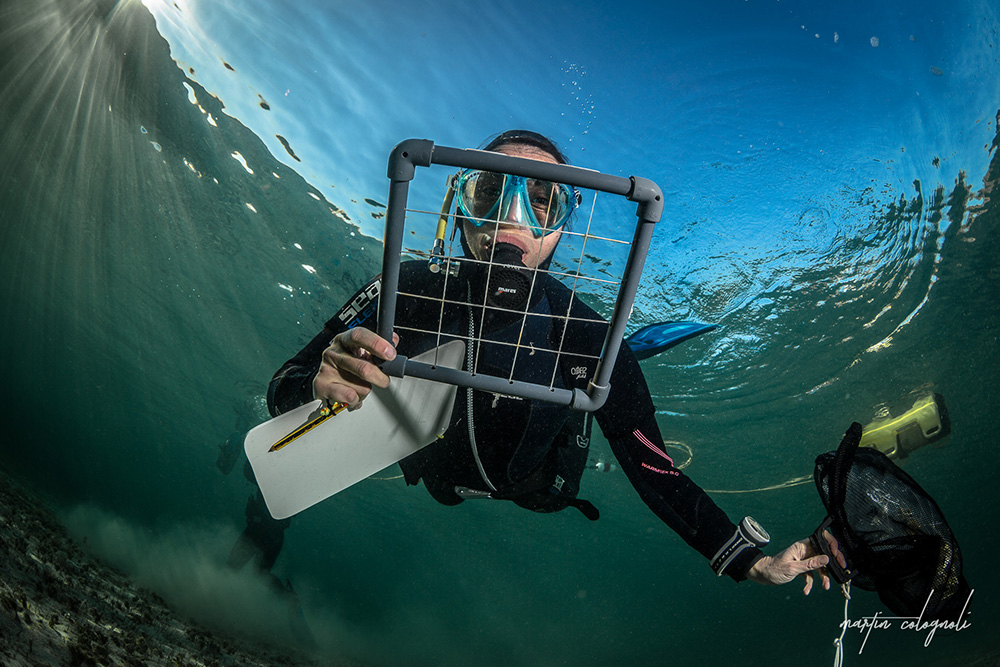 Why this interest in invasive seaweed and seagrass meadows?

Invasive species are a big problem for ecosystems worldwide – in fact, they are the second reason for biodiversity loss, after habitat destruction, and  an important conservation issue. The number of “invasions” is on the rise, and the Mediterranean is a hotspot for invasive species.

In order to manage invasive species, it’s essential to obtain information about their capacity for expansion in space and time. A citizens’ science platform is ideal for obtaining this type of data. Moreover, many seaweed species can exert strong effects on their environment, because they often are what we call “engineer species” that can modify ecosystems at several levels — not just affecting other native seaweed, but also invertebrate communities, fish and so on. That’s why we have focused on this project, to detect and follow up on any invasive seaweed.

As for the marine meadows project, marine phanerogams – such as Posidonia, although it’s not the only one we have in the Mediterranean – create important underwater forests that benefit us with many “ecosystemic services” (clean water, capture of carbon dioxide capture, fisheries). Marine phanerogams can expand vegetatively, like strawberries, but they also reproduce sexually, producing flowers and fruits. Knowledge about this type of reproduction is still very limited.  Advancing in this field – where and when they reproduce, with what intensity and frequency, the fructification process and success– is crucial, not just to expand our basic knowledge of species, but also because this sexual reproduction provides plants with genetic variability, and this variability is essential to adapt to environmental changes. In the climate change context, it’s especially relevant to define how the sexual reproduction of different species varies in time and space and what possible factors can alter it.

Why is marine citizen science important?

There are no magic wands that provide answers. Management and conservation decisions, whether they are about marine resources or about pandemics, must be taken using the best science available, evolving as science advances.

Citizen science is important for many reasons, each one of them as important as each other. It’s very valuable to the scientific community, because it allows us to obtain data in space and time scales that we cannot achieve on our own. Obtaining this data allows us to ask scientific questions we couldn’t ask before – because we have access to previously unreachable scale data – and also obtain more robust conclusions to the scientific questions we ask ourselves, because the capacity to answer them is mainly limited by the capacity to obtain sufficient quality data.

There are also various aspects linked to the relationship between the scientific sphere and society. Citizen science allows the scientific world to get closer to citizens. This is important because it enables various things: on the one hand, it allows us to inform people of what we do – in my case, mainly studies about how marine ecosystems function and the impact human activities have on their functioning – and on the other, consider the issue we want to solve, be it about marine conservation or health, for example; and find out why obtaining this knowledge is necessary, which leads us to valuing the importance of science in resolving the question or problem. All of this allows society to find out what scientific studies are being carried out, and to appreciate them.

As well as informing about what we do, it also allows people to find out how science “happens”. I think understanding how the scientific method works is important for various reasons: for one, it allows us to develop critical thinking. I think it’s especially important now, when we’re constantly supersaturated with information coming to us from all sides (much of which, unfortunately, is disinformation): developing critical thinking will help us discern what information is and isn't credible and reliable.

Getting involved in the scientific process also allows citizens to value the complexity and effort of obtaining scientific knowledge, that it takes time to obtain answers; and it shows society that science is in continuous development, that it’s not something static; there are no dogmas or absolute truths. I think this is important, especially during these times of pandemic, so that people understand that we are learning as we go, and we rule out hypotheses while refining and improving knowledge, adding nuances to what we know.

How would you rate marine research in the Balearics?

I believe investing in science must continue and be a long term plan that remains in place regardless of changing governments. I think the importance of financing science has become clearly evident: when there are public health or environmental emergencies, what propels us forward is scientific knowledge. The Balearic Government is making efforts to invest in science, and that’s extremely valuable, especially in marine science, considering the economy of these islands is so inextricably linked to the sea.

I feel extremely fortunate to be able to work on marine research in the Balearics, because we have fascinating ecosystems, which in some cases are much better conserved than other parts of the Mediterranean. There is a great deal of interesting and cutting edge research going on here. In Mallorca alone we have several institutions (IMEDEA, IEO SOCIB, UIB) devoted to the subject, with excellent professionals who are experts in their field.

Two important issues to investigate – which are systemic and structural – in Spain in general, and in many parts of the world, are gender inequality and lack of resources. Fortunately, there are more and more women in what we now call STEM (Science, Technology, Engineering and Maths), but masculine domination continues in the majority of scientific and academic institutions. For example, there are increasingly more women with biology degrees, but the proportion of women working on research is still very low.

Another problem is the lack of resources that are invested in science. Unfortunately, science funding always suffers when there is a crisis, and in general Spain invests a great deal less in R&D (Research and Development) than many of our European neighbours, who then get a lot of out of this scientific knowledge. It’s especially worrying that we’re investing in young people’s research education and have a surplus of outstanding students, trained with public funding, who then cannot pursue their profession, have to move to a different country with more resources or abandon their degree altogether.

What’s your relationship with the sea?

The sea has formed part of my life for as long as I can remember – playing with the waves as a child, swimming, diving, sailing… in fact, I cannot conceive my life without the sea nearby. It’s an entire universe in itself, with thousands of mysteries to discover.

A book: Circe, Madeline Miller.
An image: Crystal clear sea waters.
A marine species: Posidonia oceanica (the “underwater sequoia”).
A benchmark organisation or person: Dr. Jane Lubchenco, an eminent scientist, both in marine ecology and conservation. She directed NOAA during Barack Obama’s mandate. (http://gordon.science.oregonstate.edu/lubchenco/jlcv).
A beach: Cala Magraner.
A sentence that defines you: Passionate about life, the sea and music.
Are you an optimist, a realist or a pessimist? A realist with a smile.