Illegal fishing in the Balearic Islands.

Inmaculada Saranova has a degree in journalism and a PhD in development cooperation. She has field experience in Latin America and the Balkans and a long career in social and environmental activism. Currently the director of IbizaPreservation, Inma is in charge of establishing the foundation's strategic lines, formulating and monitoring projects, choosing collaborations with other entities, strengthening alliances, and ensuring strict compliance with transparency and good governance policies.

What is the state of health of the Balearic Sea?

As we already know, the Mediterranean Sea is one of the most polluted in the world and one of the most affected by climate change. We experienced this first-hand this summer, when temperatures in our seas were up to 4 degrees above normal, reaching 31 degrees in places like Sa Dragonera. These temperatures are causing negative effects on our marine ecosystems that may be irreversible for some organisms. In addition, we have many other effects, such as illegal anchoring on Posidonia, poorly treated water being dumped into the sea, boat bilges, illegal fishing, etc.

What do you think are the most urgent actions to recover it?

We need to start fulfilling the commitments that have already been made, such as, for example, the commitment to effectively protect 30% of the sea by 2030, an objective that still seems a long way off and which we need to hurry to achieve. In addition, it is urgent to halt climate change, as we mentioned earlier, and for this we have to see what we can do in each of our areas of action. In the case of the Balearic Islands, one of the main sources of CO2 emissions into the atmosphere is transport; in this sense, on land we must promote zero-emission vehicles, encourage collective transport, and if private transport is necessary, use electric transport. At the marine level, we must continue to promote transport with alternatives to diesel, but in the case of air transport, there is still no alternative to fossil fuels, so we must start to cut back the number of air operations to and from our islands to reduce our carbon footprint and the emissions that cause global warming. This will necessarily involve new economic models that do not involve the air movements that the islands have had to endure up till now.

What are the challenges ahead of us to put an end to illegal fishing in Ibiza?

The first challenge is to determine the real impact of this problem on the island, as there is a clear lack of reliable information in this regard. The second is to raise consumer awareness of the need for the fish we consume to have reliable traceability and to come only from legal fishing that complies with all the relevant commercial and environmental regulations.

Can you explain to us what the illegal fishing project you are implementing consists of?

It is a project in which we are collaborating not only with Conservation Collective, but also with Marilles and Mallorca and Menorca Preservation. It is based on a study that shows that illegal fishing and the illegal sale of fish products is a widespread practice throughout the Balearic Islands and that it affects all sectors related to fishing and its commercialisation. One of the conclusions is that the demand for fresh fish from restaurants and individuals, as well as the lack of consumer awareness, is one of the priorities for action. Current resources are not sufficient to tackle this problem and enforce compliance with existing regulations, both on land and at sea. We are now working on lines of communication aimed at the consumer.

What were the most important conclusions from the most recent Marine Forum?

Among the most noteworthy, the Marine Forum created a collaborative space with the attendees to help in the process initiated by Marilles Foundation, one of the Forum's promoters, to compile various proposals that can be included in the electoral programmes of the political parties in the run-up to the elections in May 2023. In addition, last May, the young people of the Future Forum of Formentera said it was necessary and urgent to change our relationship with the sea. Also, the panel on Global Warming and its impact on the seas and oceans, left reflections such as the urgency of acting to curb the rise in temperatures and the erosion of the islands. 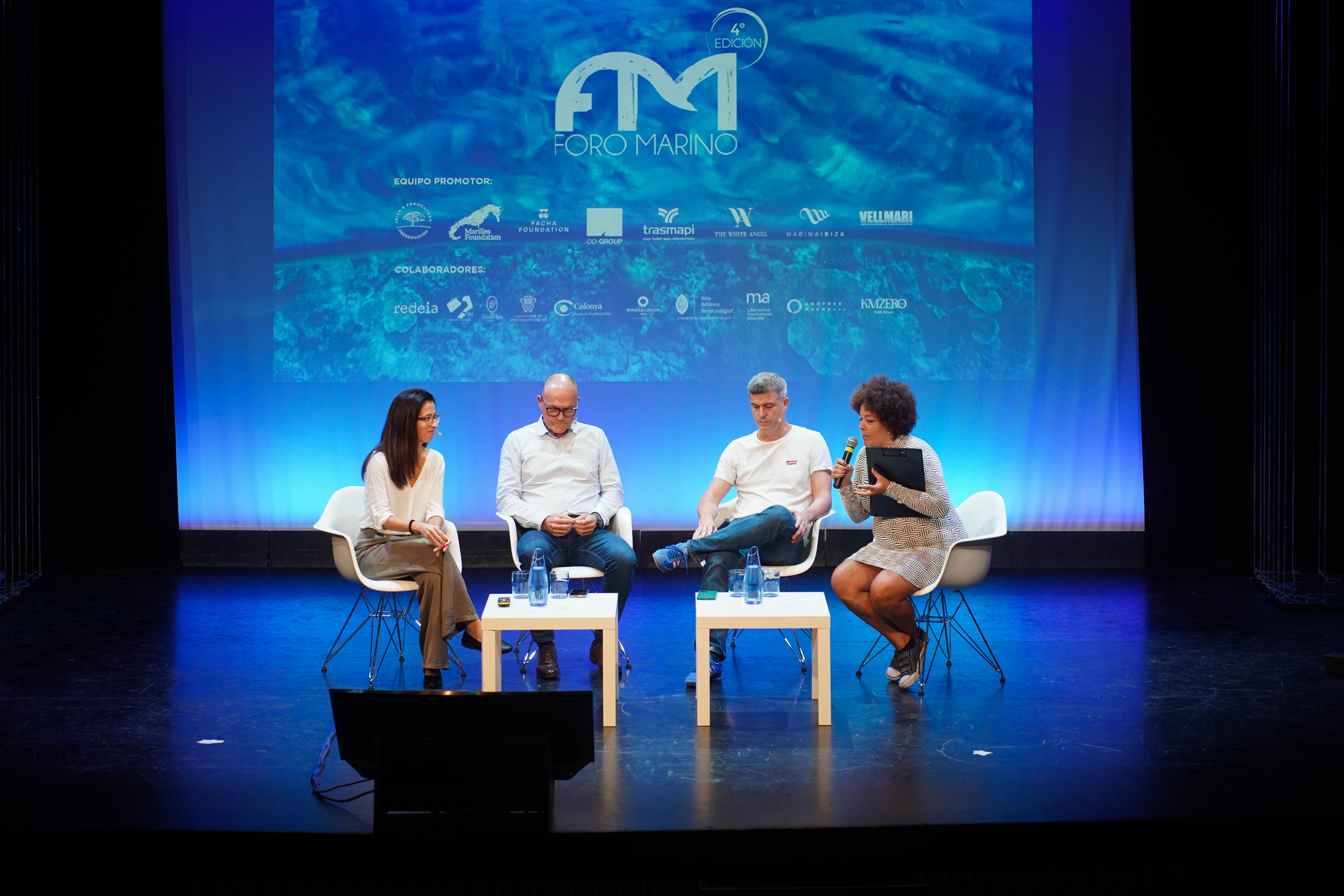 Inma Saranova at the 4th edition of the Marine Forum, held in Ibiza on 3 and 4 November 2022.

What is your relationship with Marilles?

IbizaPreservation and Marilles Foundation have a long and fruitful collaborative relationship. We have worked together on many projects such as the illegal fishing project we mentioned earlier, and on many others such as the Marine Forum itself, a relationship that we hope will continue to bear fruit for many years to come.

What is your personal connection to the sea and when did it begin?

The truth is that I have always considered myself a "dryland" person, as I was born in Soria and raised in Albacete. My relationship with the sea began in Valencia when I went to study there and has been consolidated over the last decade in Ibzia, where I have not only enjoyed it recreationally, but it has also become an essential part of my life.

A book: The Kingdom of this World, by Alejo Carpentier.

An image that evokes the Balearic Islands: A blue canvas.

A person or organisation of reference: Yayo Herrero.

Blue economy in the Pitiusas.

We are collecting proposals for marine conservation policies.